“Nihilism is often discussed in terms of extreme skepticism and relativism; for most of the 20th century it has been associated with the belief that life is meaningless. Existential nihilism begins with the notion that the world is without meaning or purpose. Given this circumstance, existence itself–all action, suffering, and feeling–is ultimately senseless and empty.”

The unknown authors of the two explanations for Nihilism, which simply means, ‘nothing’ had me pondering the points made within their descriptions. For the past few days I have been thinking about the belief that many share: life is pointless.

The “Why” question is something I have questioned and written about before. I was at a standstill point several years ago which brought about the question of just what, or who, the creator is, and just why we are all running around this planet floating through space. I was raised to believe in a man who took away my sins, and that I was a sinful person in need of saving. Although, for the majority of my life, I had no idea what that meant. I was raised within a home with that belief system, but I had no knowledge of the religion. My parents were Catholics. My whole family was, and still is from what I can gather. But growing up, I could count on one hand the times I attended church, and none of those times were with my parents. I remember my parents saying that they had spent a great amount of time growing up within the church, but beyond that, I still don’t know why they refused to attend a place that was supposedly so much of a part of their belief.

In our city, the Catholic churches are built so that everyone can see their towering steeples and elaborate design from great distances. We would always drive by these places and observe the splendid architecture, but we’d never go to visit God. Yes, for many years as a young kid I had thought that God was actually in those spectacular buildings. Like I could go and visit a guy that had direct access to God. He was the one dressed in black. Or, he was the one waving his smoke on the stage, wearing the long robe. He was the man who could access God, and I was the one who couldn’t. I had to listen to his words as he read from the big book in front of him to know the creator of all of these things within the world.

A creator: the maker of all of the beauty I would see. My earliest memories are of sitting outside and looking at all of the colorful objects. Green trees. The blue sky with white clouds floating by. The flowers that would grow in the yard my grandparents had. The life that would crawl around on the ground. The lovely birds that would sing. All of these things that were like myself: alive. Vibrant. Created. Those earliest memories had me wondering just where I had come from. I remember asking my mother early on where I had come from and she would only say, “My belly.” But, something else was going on. I distinctly remember those specific thoughts of wondering where all of the beauty had originated from at a very early age.

Even when I was growing older throughout my teenage years, and even though I was diving head first into the drug-induced haze, the unbeknown sinful lifestyle, I would still go out to the wooded areas or find a beautiful landscape and willingly encompass myself within that same wonder of childhood. I would just observe the beauty. I would think about the perfect order of functions. Structures. Processes. All of these things that, in no way, could only be happenstance.

Church, and not the Catholic, was introduced again by means of my wife in the recent adult years. Her grandparents encouraged us to go to their house of worship. The Bible was preached, and I mean PREACHED by a very arrogant and pushy man. Although I began to really despise the event of the Sunday morning charade, for the first time within those Sunday morning gatherings I began to see just how destructive my life had been through the medium of my personal sinful ways. I was guilty before God for the first time. For the first time, I understood the need for a savior. I saw the explanation to everything through a deep and thorough study of His Word, and with that being said, it was with the help of His Holy Spirit which led me to that understanding. My mind within skepticism and lack of faith never knew what The Word meant.

Though the experience in an environment that I later found to be extremely unhealthy and not very biblical, I saw Jesus in His truth. It was that beginning which brought me to the present-day relationship with the Lord.

Nihilism is a dull, joyless, meaningless, skeptical of nearly everything, ridiculous and wasted way of looking at life, in my opinion. Although, someone reading this will think the same of my view on a god that cannot be seen or proven by means of science. Many have not seen the harm of the choices they’ve made, nor have they seen the true essence of evil and good in a biblical sense. “Religion,” as most call it, is written off as a battle of morality. A structured view of one’s own battle between guilt and purity, and not a view that emanates from a longing to give honor to the Creator of our existence. I can personally see how the ‘Christian religion’ can distort the true nature of our Lord, as the body is so divided in their beliefs. The denominations and sects have destroyed His Word, so I can see how some never get to know Him in Spirit and truth. Especially one who looks to the world and sees a creator, and longs to know His true nature. We need straight Bible teachers, not men with an agenda who add works to His simple message. People are being robbed of the love that awaits within the arms of our Creator because of the same sinful ways that push some into the grips of Nihilism, found right in the houses society calls, “Holy.”

I sometimes wonder how one cannot see the proof of God in the beauty of nature. How can one be so despondent? The blindfold of pride lays upon the eyes and ears of the folded-armed skeptic, while the magnificent beauty our Lord Jesus lies within reach. The nihilist, the atheist, even the agnostic and the theist who lacks a foundational understanding of our Lord through Christ, have no true view of the complete point of life. Blessed are those who do.

I pray today that each one of you seek the true meaning and reason for this life: Jesus Christ.

I am just a man. Real. Raw. Transparent. I have lived through many battles within myself, as well as in my personal life. I continue to grow. For some reason, the great God of the universe has placed me within many positions that have caused great wonder within, and I continuously strive to embrace it. I spend my time thinking deeply about the many different obstacles, experiences and peaceful pleasures that come my way, sharing my journey as it unfolds. It has taken me many years to accept some hard truths about this life, myself and the people who are all around us. Join me as I go through the struggles, victories and lessons. I strive to keep God through Jesus Christ at center. I hope that my words bring the reader encouragement, peace, joy, and a deeper appreciation for love. I also hope that we all see the real struggle that we all face in this life. May my writings bring someone, somewhere, thoughts that contribute to their own personal relationship with the Lord. View all posts by Damon W. Brewster

I am just a man. Real. Raw. Transparent. I have lived through many battles within myself, as well as in my personal life. I continue to grow. For some reason, the great God of the universe has placed me within many positions that have caused great wonder within, and I continuously strive to embrace it. I spend my time thinking deeply about the many different obstacles, experiences and peaceful pleasures that come my way, sharing my journey as it unfolds. It has taken me many years to accept some hard truths about this life, myself and the people who are all around us. Join me as I go through the struggles, victories and lessons. I strive to keep God through Jesus Christ at center. I hope that my words bring the reader encouragement, peace, joy, and a deeper appreciation for love. I also hope that we all see the real struggle that we all face in this life. May my writings bring someone, somewhere, thoughts that contribute to their own personal relationship with the Lord. 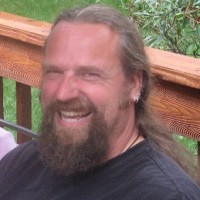 Follow My Journey on WordPress.com
Inspiration, Insight, and Faith

Inspiring To be faithful, Believe In One's Self, and Love Life.

To justify the ways of schizophrenia to man

a nomads thoughts on faith and life

From Sin To Salvation

The Lord Jesus Christ Provides A Way From Sin to Salvation

The Truth & The Chaos
from a spark to a flame

fan into flame the gift of faith

A Weekly Journal of Faith

Wrestling with Faith and Mental Health

All goes onward and outward. . . .and nothing collapses, And to die is different from what any one supposed, and luckier. - Walt Whitman

We're all made of stardust and love

Talking about my books, themes and ideas about life

exploring the intersection of the monstrous and the sacred

Sharing What Brings My Life The Greatest Joy Through Poetry

Poetic Landscapes Of The Spirit

Writing from the Heart with Brian
My Surrender Project

Thoughts on God's Amazing Life in Us

The Search For His Heart

The one who already knows yours

Under a Slovak Sky

“Home is the nicest word there is.” ― Laura Ingalls Wilder

A Doctor's Reflections on Psychology and Spirituality • Give Light, and the Darkness will Disappear of Itself

Seasons of the Soul

Stories about family eccentricities, love of labradors, wrestling with seasonal depression, and anything that ignites my passion!

Trusting the Love of Jesus Christ, One Day at a Time - Psalm 13:5 NIV, “But I trust in your unfailing love; my heart rejoices in your salvation.”

I wish you peace

I hope this is a place where you will be encouraged, challenged and fed spiritually on the wonderful Word of God!

Poetpaspoetry
Becoming the Oil and the Wine

Becoming the oil and wine in today's society

My life down the Rabbit hole

''A rabbit hole is a metaphor for something that transports someone into a wonderfully (or troublingly) surreal state or situation''.

Let your soul burn a flame in this world. Be damned to make a difference. ~ Jenna Noel~

"Diving into a writers soul is discovering the broken treasure and beautiful mysteries that make you gasp for air."

Musings of a Mindful Disciple

my king is the true poet the beauty of marvelous majesty, the author and finisher of my faith, the most magnificent artist paintings of a masterpiece soon to be revealed